Most people are familiar with the term “ambush” and know that it is a surprise attack that is designed to catch the adversary unaware (even if they are expecting it) thus rendering them more vulnerable. The element of surprise is fundamental to the success of this tactic. Ambushes are quite commonly used as part of more sophisticated and complex tactics. At its most simple, an ambush is about concealing your intentions or forces until the time when the enemy is in a position where your attack will do the most damage while, at the same time, minimising your own exposure.

However, the fact that it is so well known often prevents people from fully understanding and exploring its components.

This tactic is common both on and off the battlefield. From the classic military ruse to brand marketing ambushes, this tactic is one of the most effective and successful.

The components of the tactic are:

There are essentially three types of ambush – the targeted, the random and the opportunistic.

The targeted or “real” ambush is meticulously planned against a specific and anticipated target. (Specific target – Specific time range and location) The “random” ambush is where the first profitable target is hit. (No specific target but a set range of time and location) The third is where neither target nor time nor location is identified but the opportunity and means occurs opportunistically and the value of the action is greater than its risks.

Particularly with military ambushes there are many variations on the theme that largely focus on the disposition of troops (positioning) and the various types of force used.

In all ambush tactics, either non-military or military, the ambush establishes a “kill Zone” or place where the target is most vulnerable and susceptible to injury. An essential discipline is to refrain from triggering the ambush unless the target is clearly within this zone. This could be either a section of jungle track or the middle of a corporate presentation.

For example, when J. F. Kennedy was assassinated it is now believed that at least three different snipers were used – each positioned so that at the right time and the right place he would be in a perfect and triangulated “kill zone”.

Discipline is an essential factor in the success of the attack. Some key military examples of this are:

There are many more points that should be considered but this is not a military combat handbook but rather and explanation of tactics.

In a business context these could be:

You get the idea …

Often critical to the success of the Ambush is the concept of “total victory”. If you launch your attack and your opponent is only wounded but survives then you can be sure that you had better watch-your-back because you have become their primary target. Your defensive position had better be excellent.

In non-military situations, the ambush can be used in a variety of ways. In the boardroom it can be the shock revelation that a board member’s strategy was copied from the internet. In the marketing world it may be when a company clearly proves that a competitor’s marketing message is a lie – live on television. (This tactic should not be confused with the marketing hi-jack). Another example of the ambush is when a journalist suddenly appears from behind a palm tree to interview an unsuspecting celebrity who has just snorted a couple of lines of cocaine and still has the “white stuff” clinging to her upper lip. So it goes on …

When it comes to defending yourself, the strategy is always the same – whether in military terms or civilian life – Get out of the kill zone as fast as possible with minimal injuries! By doing this you may at least live to fight another day – and with some skill and luck get some payback.

There is one final aspect to this tactic which is known as the double ambush or the reverse ambush. This occurs when the intended target knows in advance that they are to be attacked and actually ambushes the attacker. For example, the target deliberately lets slip that their report is copied from the internet – then, if and when they’re ambushed they look shocked and prove that it is in fact their own work. In short, the attacker is ambushed by their own strategy.

The difference between the ambush and the hit-and-run tactic is mainly about positioning. Hit-and-run requires actively “going” to the target while the ambush is about patience and waiting for the target to “come to you”. 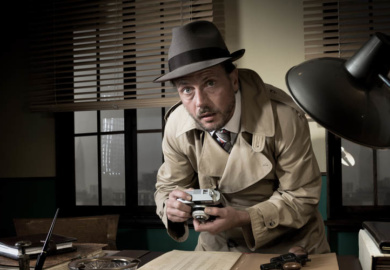